Kerry is back at it again with a super cute idea for this time of year.  She made these for her child's classmates.  She says they are super simple and quick.  Cut the cardstock 4.25” x 8”.  Score at 2.5” on the long side and fold.  Position the cardstock so that the fold is not quite touching the bottom of the top note die.  Run through the big shot and the top note die (exclusive to Stampin' Up!).  Adhere sides together to form the pocket.  Stamp and decorate as desired.  Kerry used the "Tart and Tangy" stamp set and the saying is from "And Many Mower" from the Occasions Mini (only available until June 30th).

She also says "I probably wouldn’t use the white signo pen if I was mass producing them, but I love the effect.  Kool aid is only 0.33 per pack so it’s a cheap gift too (or perhaps frugal is a better word!)!! 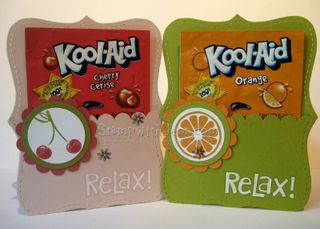 Thanks Kerry for an inspiring idea!

The content in this blog is the sole responsibility of Jenn Tinline as an Independent Stampin’ Up!® Demonstrator. The use of and content of this website, classes, services or products offered is not endorsed by Stampin’ Up!®